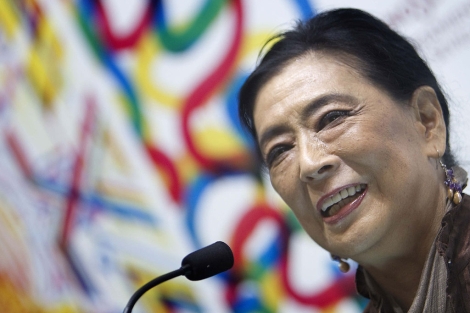 The show will start with "Fandangos", "Rondeñas" and "Malagueñas", to continue with "Soleás", an adaptation of "Fire Dance" by Manuel de Falla, "Alegrías", "Seguidillas" and a finale act in which Komatsubara will perform.The show includes a brief conference illustrated by the Japanese choreographer, with a "cantaor", which explain each of these "palos", as the touring shows, which has also led to North America and South America and countries like China and Korea, have an educational component and difussion of flamenco. "Flamenco Passion" features a dozen Japanese dancers, and dancers like Juan Ogalla, Andoitz Ruibal and Antonio Buendia, singers David Palomar and Miguel de Badajoz and guitarist Juan Carlos Berlanga has been hired by the Andalusian Institute of Flamenco. Komatsubara regretted having to hire the dancers in Spain by the lack of Japanese dancers, and in their schools there are now over hundred girls learning flamenco but only two boys who are not yet ready to board the scene. Juan Carlos Berlanga, who accompanied with Juan Ogalla the Japanese artist, has said that the treatment of Komatsubara with artists in Japan is better than in Spain, and that the director " has great ideas, and as a teacher gives always a lot of freedom." Berlanga has been twenty years performing in Japan, and also Ogalla has experience in this country, which has stressed that Japan has a flamenco public "very knowledgeable." Komatsubara added: "To feel, Spanish and Japanese are the same, but the expression is very different, the Spanish upset and cry when they want, but in our education, laughing for example in front of people, until recently, was very bad.