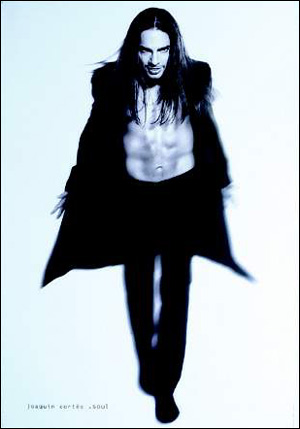 Joaquín Cortés releases a DVD featuring the recording of the performance that took place in June 2002 in the Royal Albert Hall in London, under the direction of Russell Thomas, who has worked for great figures like the Icelandic singer Björk.
'Live' is a show wherein music and cante take center stage. Joaquín Cortés has conceived the work as a journey through the forms of flamenco, presenting himself to the audience on his own, like a bullfighter facing the bull head-on. The dancer from Córdoba fearlessly takes on the challenge, interpreting the music with his dance, with elegance and feeling. As in Soul, the artist takes on mixtures and fusion, and once again the full gamut of references that this implies.
With an impeccable production, which reveals details that escape spectators in the auditorium, in almost two hours this musical video-recording collects the entire show, as well as an interview with the bailaor (with sub-titles in English) in which he talks of his influences, his understanding of flamenco dancing, his technique and style… Furthermore, there are two additional annexes: a photograph album and takes from the rehearsals.

Joaquin Cortés is broadening the base of flamenco dance in the world, the good ambassadors of Spain.
Cortes' costumes have always been designed by Giorgio Armani, with whom he has had a cooperation arrangement for nine years. "I have mixed different forms of music and dance in my shows, but my style is still firmly rooted in the flamenco traditions. There aren't so many rules as with classical dance, and it's not so technical. For Gypsy people, it is in the blood and is a way of life!
Fatal error: Call to a member function getLink() on null in /var/www/vhosts/flamencoexport.com/httpdocs/public/flamenco2018/templates/default.phtml on line 51