The manila shawls are square silk cloths decorated normally with vibrant colours with flowers, birds, etc, and finished with an exterior border with fringes. Its origins go back to the trade routes created by the spanish Empire with the asiatic continent, more specifically with China and Filipinas. It is from there where the shipments of oriental merchandise used to come, in between those things there were the shawls. Its popularity increased in Spain initially due to the prohibition of the Catholic Monarchs in 1492 of the use of veils. Moor women started, then, to use this oriental shawls to cover their heads and faces.

Originally they were made in large sizes and in silk, and the decorations used to reflect the oriental flora and fauna with chrysanthemums, bamboos, dragons and birds originals from those lands. Over time and with the increment in the spanish demand they started to modify the shawls changing the embroidery with roses and carnations, and in Spain they introduced the fringes, original from the arab culture. This fringes were placed with silk thread and using the macrame and crochet techniques. The typical colours used to be black, white, ivory and red. The manufacture process started with the creation of a paper template in which there were made several perforations. Then, this template was used to create the marks with chalk over the cloth, and afterwards, with the help of a racket, the cloth was carefully embroidered. The work was finished with the placement of the fringes. In order for the shawls to arrive in the best possible condition to their destiny, special cases were manufactured in Filipinas to transport them. Squared boxes with lacqued and golden wood, decorated with mother-of-pearl inlays and chinese decorative motives 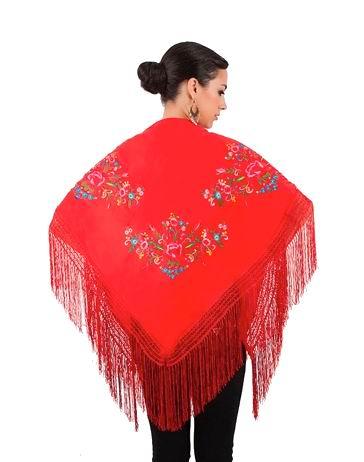 As for the right way of using them, the most common is on top of the shoulders, but also tied on the side or at the height of the hips. And for the proper way of storage them there is an expert way of folding it, though for most people who doesn't know how to do it, it is recommended to hang them in the wardrobe with a plastic cover over it. In case it is needed you can flip it over and gently go over it with the steam iron.

Regarding the types of manila shawls that exist, there are two traditional kinds that can be mentioned. On one hand there are the cigarreros (inmortalized in the Carmen de Bizet opera), decorated with big roses and carnations, embroidered in vibrant colours, with bamboo branches and flowers. On the other hand, there are the isabelinos, whose borders are decorated with flowers but the center part is empty. Each of the flowers that used to decorate the shawl had a special meaning: the violets were related to purity, the daisies to impatience, the roses to secrets and the sunflowers to loyalty.

This way, little by little they became more and more popular until they ended up replacing classic shawls and headscarves in the XIX century. And over time a lot of new workshops began to appear in Sevilla to create their own collections. Also, the flamenco dancers borrowed the idea and integrated it into the dancing. Its use, however, was really complicated due to the fact that only the most expert dancers were able to use them in their dances as if the shawls were an extension of their bodies.

The combs, on the other hand, were feminine ornaments for the hair with a convex body and a group of spikes that fit in the bun. Originally they were manufactured with tortoiseshell, but this days they are mostly made out of synthetic materials. They became traditional in Spain at the end of the XVIII century, and the shawl is often a classic complement for it, since it stylizes women's figure. 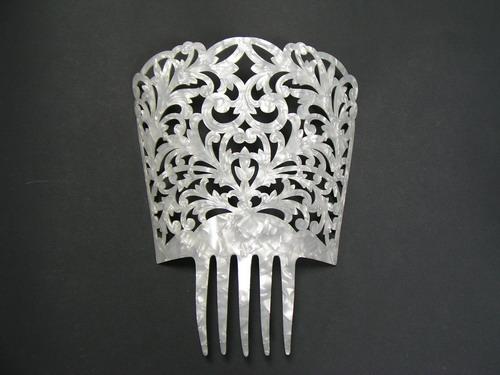 If you are interested in buying any shawls or combs, you can visit our website were we have a huge selection in different colours, styles, etc. This are the best accesories for your flamenca dresses or to acompany your dances on stage.