Since la Feria de Abril is around the corner and it is only a month away, we are going to show you on our blog some of the novelties of this year, and a summary of some historic details and curiosities about the event, so we can start preparing for it and learn a little more about this really popular fiesta.

In terms of news, this year the biggest highlights are that la Feria will add one more day of fiestas and it will take place from the 30th of July to the 6th of May. This was approved at the end of last year through a municipal ordinance in order to take advantage of the touristic pull of the weekend. On the other hand, under the name 'Sevilla universal culture, between Murillo and the Expo of 92', the gate of the Feria de Abril 2017 will be dedicated to the fourth centenary of the painter's birth, and to the 25 years of celebration of the Universal Exposition. This will represent the bottle ovens of el Monasterio de la Cartuja, old clay factory of Pickman, and it will be flanked at the top by this two ovens with the orange bowl, the symbol of the Expo, above the arcs of el Paseo del Futuro of the universal exhibition.

If you are thinking of visiting la Feria de Abril de Sevilla this year and you don't know what to wear, you can visit our web pages of Flamencoexport, where you would find beautiful flamenca dressess as well as short suits for guys and any other accesories you may need to finish your look. 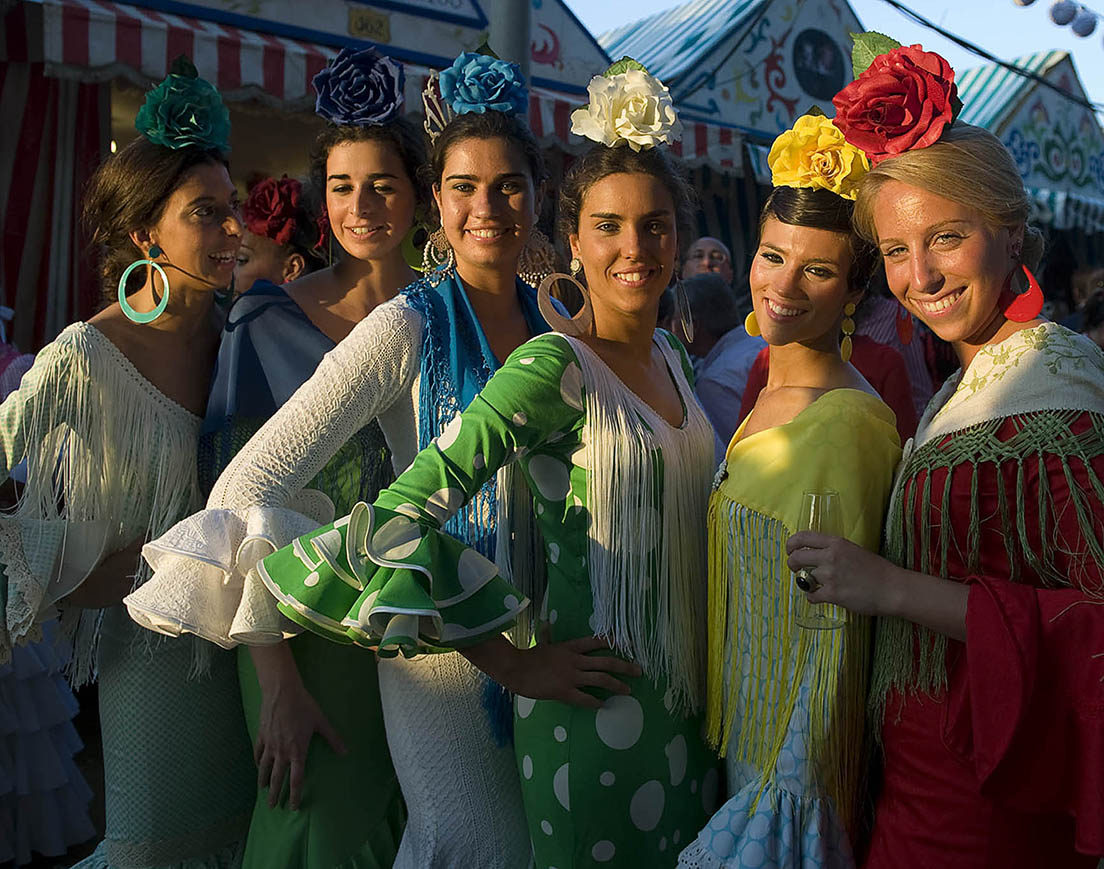 The origins of la Feria de Abril of Sevilla go back to the 25th of August 1846, when curiously the catalan Narciso Bonaplata and the vasque Jose María Ybarra signed a proposition presented to the local council, to ask for authorization to celebrate an anual fair during the 19, 20 and 21 of April. The council accepted the idea, that was seconded as well by the local breeders and farmers.

That way, the fair was celebrated for the first time in 1847. The inicial program included the awarding of several cash prizes to those who had the heaviest ox with less than two years old, the biggest ox in general, the best flock of ten sheep with less than two years old, and those who had the best wool. Likewise, they acknowledged the best bull of the bullfight of the 20th, and the fastest horse of the race of the 21 of April. Besides, the fair had carousels, cantines, carriages, buñuelos and all shorts of booths, as well as a big bullfight.

In 1850 there were 60.000 heads of cattle, 15 licences for buñuelos stalls, 34 for nougats and hazelnuts and 93 for taverns were issued. In 1863 the famous spanish Price Circus went to the Street of Hell, and in 1864 fireworks were used for the first time. The fair lighting went from being infused with oil to gas in 1866, the first electric lamp appeared in 1874, and in 1877 the first paper lanterns were installed. That same year the queen Elizabeth II visited the fair for the first time.

Later on, in 1885, they put all over San Fernando street, 34 crystal globes arcs which had burning gas lights inside. The first booths of the big casinos and Sevilla circles appeared for the first time in 1893, and in 1894 was held the first contest of advertising posters of the Feria. Two years later the famous iron bridge was inaugurated and was illuminated by 798 lights and an electric arc. It remained in its place until 1920, when it was demolished. Also, after 1914 the fair lasted 5 days, and in 1916, the king Alfonso XII and the queen Victoria Eugenia visited the place for the first time.

When the Republic started on the 14th of april 1931 the fair had to redouble the efforts to complete that years event preparations with the tricolour flags of the new regime. The cost of such a fast change was of 13.250 pesetas. Later, with the Civil War explosion, the fair had to be temporarily cancelled, and during the postwar times it was celebrated with less explendor due to the economic hardships. In 1953 the fair went to add another day of celebrations, and eleven years later a big notorious fire happened in the Real that burnt 64 booths, and left many injured and one dead.

As for renowned visits, it's worth to mention those of the prince Rainiero of Monaco and his wife Grace Kelly, who went to la Feria de Sevilla in 1966. Jackie Kennedy, widow of the president of the United States John F. Kennedy, also visited the fair. And in 1968 the Kings of Spain made their appearance for the first time. On the other hand, one of the biggest changes of the fair happened in 1973, when it was moved to the actual site in the Remedios neigbourhood. This place, as time has passed, has gotten small for the fair too, since it already is 40.0000 squared metres occupied by more than a thousand stalls, and that is without counting the enormous amount of petitions the City Hall receives each year to install new ones.

Usually most people wears the traditional costumes of the city. For women, it is common to wear a dress with frills, that has its origins on the dealers and traders wifes, most of them of gypsy ethnicity or peasants, that used to wear comfortable gowns with frills which over time ended becoming a trend. The price of one of this nowadays rounds 300 euros, even though there are cheaper ones too. It mostly depends of the quality of the fabrics and wether if its handmade or not.

The flamenca dresses are one of the most characteristic elements of the fair.

The flamenca costume was oficially installed after the Iberoamerican Exposition, which was celebrated in Sevilla in 1929. This event was meant to be a way of share a brotherhood between countries of both sides of the atlantic ocean.

Originally the fair started in the middle of Easter and was celebrated during the holy week. Nowadays that would be impossible, since at the time there were no processions, but today they are a really important part of Easter.

This is the typical sing and dance that was always commonly used to celebrate anything in the region. They were popular during la Feria de Abril and El Rocío de Huelva, and also in pilgrimages and neigborhoods. Apparently their origins go back to the previous years of the Catholic Monarchs era, to some spanish compositions called seguidillas castellanas, that with time evolved to a tune with more flamenco air.

La Feria de Abril de Sevilla starts every year with the lighting ceremony, moment in which thousands of bulbs light up in the main gate of the fair. The last day la Feria is closed with fireworks. 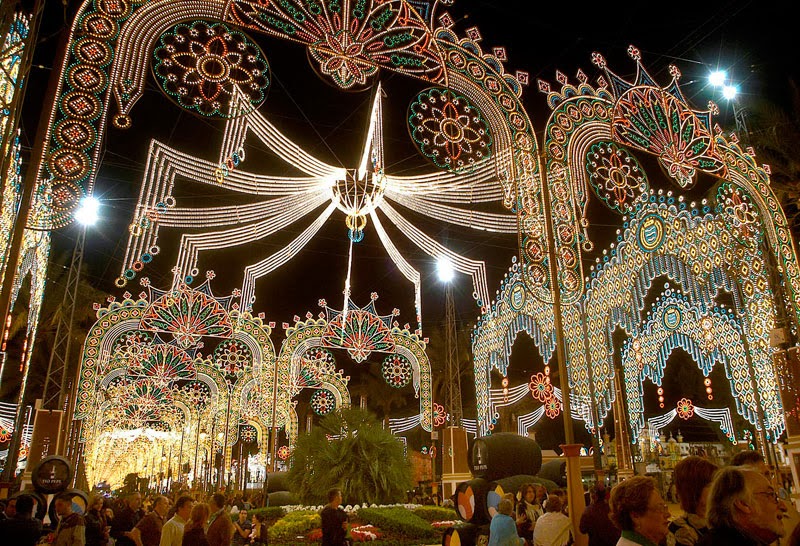 The lighting of the gate of the site opens the fair every year.


In la Feria de Abril its common to drink rebujito. It is a beverage created in Montilla, a village of Códoba, that has spread throughout all the community. It is a refreshing drink made with a mix of 7Up and manzanilla, a variety of fino sherry.

At first they used to be linked to the livestock sales and, in reality, they worked as the animals stables. In 1849 was when the City Hall mounted the first modern booth, used to monitor people and mantain the order during the fair. One year later, others started installing their stalls to offer all shorts of things, food, products, entertainment, services, etc.

The first fireworks were burnt in 1864.

The horse carriages rides are part of the tradition of this fiesta. They are a show in itself and a lot of people go early in the morning to watch it, since its something that attracts a lot of attention. The riders always wear short suits and their companions flamenca costumes.

The horse carriages rides are one of the most common activities during la Feria.

The fiesta normally starts the night of el pescaíto, a dinner before the lighting event whose main course is fried fish accompanied by the typical fine wine or manzanilla.

It is common to eat fried fish with a cup of manzanilla to refresh the heat, though there are also other typical dishes like paella that anyone can taste during la Feria.

During those days it is also common to eat buñuelos or churros with hot chocolate. And at night its traditional to take some broth with peppermint to recharge.

At the end of el Real there is the Street of Hell, called like that because of the noise of the fair rides, which in total are more than a hundred.

The Street of Hell houses more than a hundred rides.

The famous paper lanterns were installed for the first time in 1877. The queen Elizabeth II went to the fair that same year to enjoy the festive environment.

One of the biggest bull fairs is celebrated every year in la Maestranza of Sevilla.

Most of the booths are private, so it is advisable to visit them with local people that will guide you on their usual routes through those of acquaintances and friends. In la Feria they also give a lot of attention to the decorations of this booths, so much so that the City Hall gives awards to the best ones every year.

The best decorated booths are awarded by the City Hall of Sevilla.

The first contest of la Feria advertising posters was held in 1894, and Francisco Candela, who won it, received an award of 500 pesetas.

This is how its called the yellow sand, typical of the bullrings, used to create the streets of the fair.

There is a specific brand of manzanilla (fino sherry), the most common alcoholic drink of the fair, whose bottle carries a guita, a small cord of about 10-15 cm, that people used to wear on their wrists as a symbol of the amount of bottles they had had already.